In 1871, Pope Pius IX declared Saint Joseph Patron of the Catholic Church. On the 150th anniversary of the declaration, Pope Francis declared 2021 a special Year of Saint Joseph “in which each member of the faithful, by his example, can daily strengthen his or her own life of faith in the full fulfillment of the will of God”.

The devotion of our Founder to Saint Joseph is well known. Days before his death, John Baptist de La Salle urged his Brothers to have a special devotion to this Guardian of Jesus and the Patron of our Institute.  Saint Joseph is our model: Joseph, the man of confidence and faith in God; Joseph, the just and humble man. With Mary he raised and educated Jesus.

In his biography of the Founder, Canon Blain explains De La Salle’s devotion to Saint Joseph:

What struck him most in the admirable life of the holy spouse of the Mother of God was his great docility to the action of Divine Providence, his submission to the most vexing commands, his prompt obedience to the voice of the Lord, his hidden life, his angelic chastity and, finally, his tenderness and love for Jesus and Mary. Virtues of this great saint that he longed to imitate.

I invite you to join the People of God and the entire Institute in celebrating the Year of Saint Joseph. In a special way, let us ask our Patron to accompany us as we compassionately respond to the sickness and suffering caused by the pandemic.

During the coming months, the Brothers of the General Council and I will offer on the Institute’s web site a variety of related resources and suggestions for their use. I invite Districts and Lasallian educational communities to plan creative and joyful celebrations of the Year of Saint Joseph and I invite all Lasallians to actively participate in these activities.  I suggest that you to share your activities on social media. 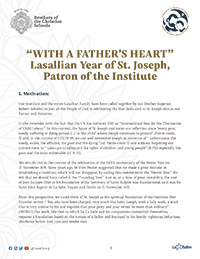